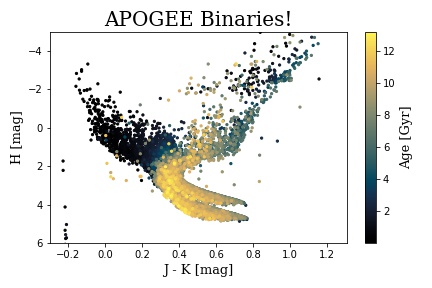 After arriving at CCA a few weeks ago, I’m starting on a project with Adrian Price-Whelan and David W. Hogg. We are trying to figure out how to answer the question: What does it mean that APOGEE doesn’t have a bunch of binary systems containing black holes? Barring the obvious reason that APOGEE’s targets are low-ish mass stars and thus unlikely to be companions to BHs and their high-mass progenitors, we think it will be interesting to compare a bunch of synthetic binary populations generated with COSMIC to Adrian’s close binary catalog.

Step 0 of this process is to work out how to generate mock APOGEE catalogs with COSMIC data. This means I need to do real astronomy to convert the effective temperatures and bolometric luminosities in my simulations to (gasp) magnitudes of both the absolute and apparent kind. Luckily for me we found Tim Morton’s isochrones package that provides interpolated bolometric corrections from the MIST bolometric correction tables. The figure above shows a CMD that I made from a little test sample of a few synthetic binaries that follow the age and metallicity distribution of the m12i galaxy in the Latte Suite of the FIRE cosmological simulations. I was pretty excited to see the suuper obvious double main sequence and that COSMIC produced something that looks somewhat similar to what you’d expect (see e.g. Fig 5 here).

Steps 1 onward will include picking which kinds of binary interactions will most severely impact a BH + star population that APOGEE can see (hello BH natal kicks!) to set up our binary evolution model set and including dust extinction. I’m sure eventually I will also open real astro data files that at some point intheir distant post-processing past came from telescopes!