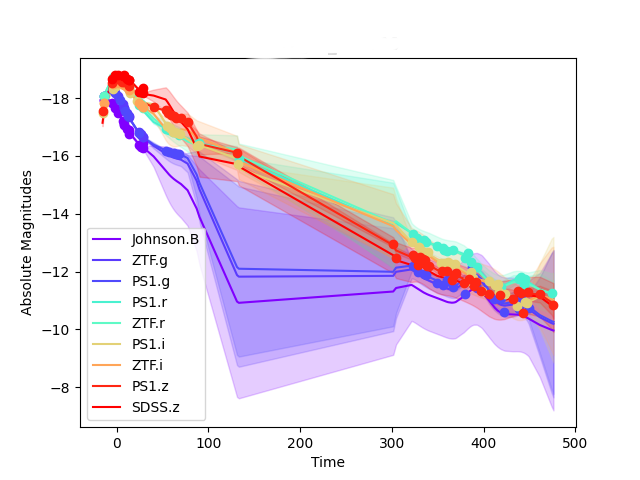 I’ve been working (slowly but surely) on an open source code extrabol which estimates the bolometric light curves of supernovae from an arbitrary set of filtered photometric observations. This code is based on a package by Matt Nicholl, SuperBoL.

Estimating the bolometric luminosity and black body temperature of a supernova is an extremely common analysis problem in time-domain astronomy as it allows astronomers to easily probe supernova explosion dynamics. Unfortunately, supernova light curves are often poorly sampled across multiple photometric filters, making it challenging to build a pseudo-bolometric light curve directly from the data.

In order to solve this problem, extrabol uses a 2D Gaussian process to extrapolate the supernova spectral energy distribution (SED) as a function of both wavelength and time. Extrabol is linked to the Spanish Virtual Observatory, a database of nearly every commonly used astronomical filter. Given the name of a telescope/filter, extrabol will link the observation to an effective wavelength. Using an arbitrary set of filters from the user, extrabol will estimate the underlying SED and then use this SED to estimate a black body temperature and radius. Eventually, the goal is to have extrabol linked with the Open Supernova Catalog, so that a user type in the name of a supernova and quickly build a bolometric light curve using public data.

For now, I am still working out some bugs! The Figure above shows an example light curve for a core-collapse supernova. Each observation is shown as a point (with error bars being smaller than the points). The GP interpolation is shown as lines, with uncertainty shown as shaded regions. Currently, I am assuming a mean function of a very dim magnitude, which works well before and after the supernova itself; however, if there is a large gap of data, the GP prefers artificially low luminosities. I got some very useful feedback from the Astro Data Group this week to investigate a more physically meaningful mean function, with residuals being modeled by the GP. My next step is figuring out if there is such a function which can be used for all flavors of supernovae!