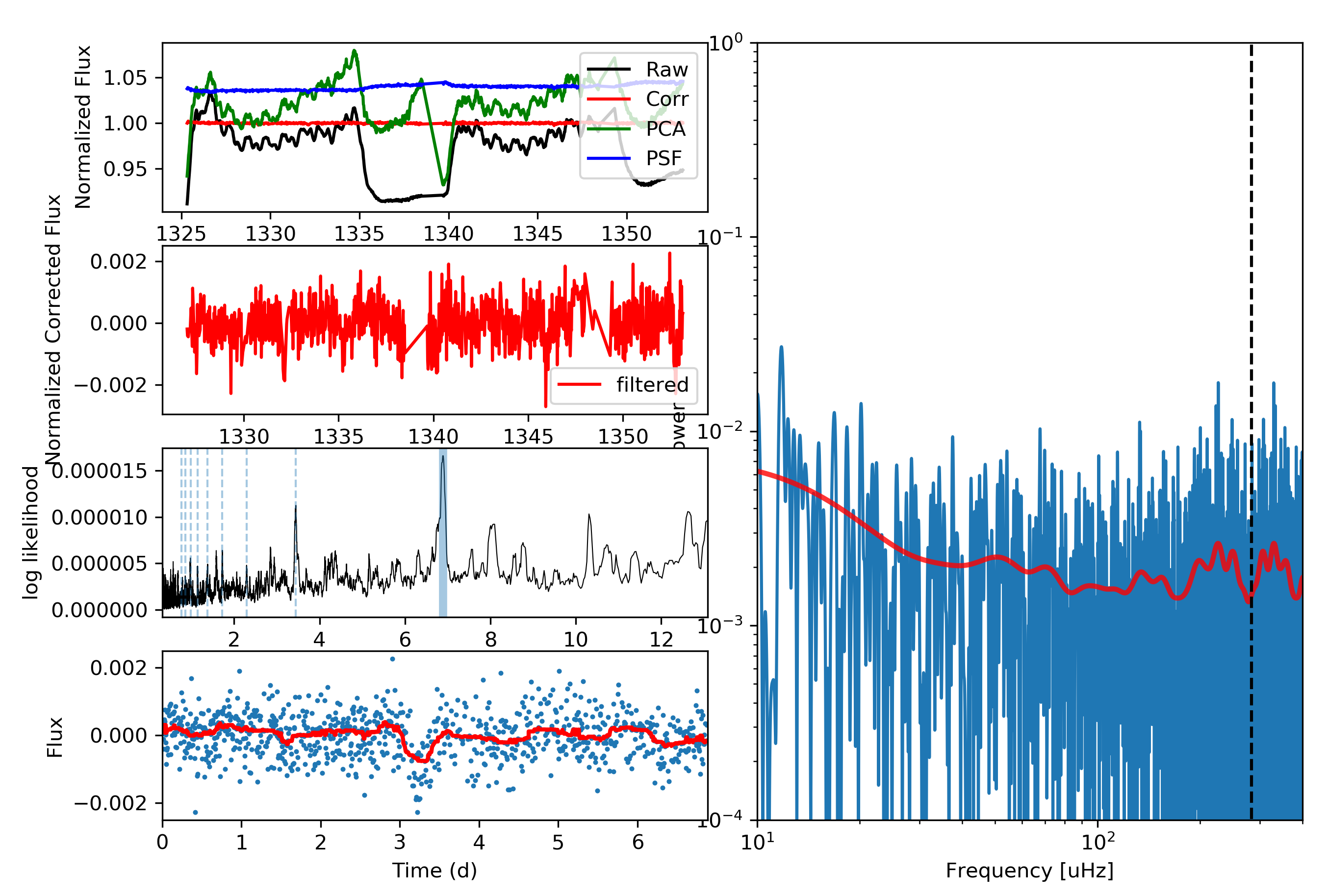 Along with starting at the Museum last month, I also kicked off a search for (large, so probably gaseous) planets orbiting low luminosity (3-10 Rsun) red giant branch stars with TESS. First, I used MAST to create a target catalog of stars using TICv8 stellar parameters, making cuts on stellar radius and temperature which left me with ~40,000 TESS targets. I then used the eleanor pipeline in order to download individual sectors of data of targets that were in TESS sectors 1 and 2. From there, I set up a “quicklook” pipeline to turn these lightcurves into plots, where I can look for key features in the data to identify high priority targets for ground-based followup RV observations. The two key features I’ve been looking for are planet transits in the lightcurve, as well as stellar granulation and oscillation features in the Fourier transform of the lightcurve. Combining these features, I can precisely characterize the stellar mass and radius, and planet candidate radius in the system, which I will combine with RV measurements to confirm planets and measure their masses and eccentricities when possible.

The plot I’ve attached is the output of a “quicklook” plot for a particularly interesting target. The upper left hand panel represents the four lightcurves that eleanor outputs–a raw lightcurve, a corrected lightcurve, a lightcurve constructed using principal component analysis, and a lightcurve made using a set PSF model. The panel below it is the corrected lightcurve which has also undergone outlier rejection and has been smoothed by a 2-day median filter. Below that is the power in a BLS search as a function of period in this lightcurve, where the peak has been highlighted in a blue band. The bottom left plot is the corrected lightcurve, folded at the best-fit BLS period. This is where I look for a clear, phase-folded transit. The right panel is the Fourier transform of the lightcurve in the second left panel. Here, the features of interest are a slope corresponding to higher power at low frequencies, indicative of stellar granulation (or other red noise features), or a “triangular picket fence” of frequencies which are evenly spaced at a particular pattern, which correspond to solar-like oscillations in these giant stars.

On the left hand side of this figure, you can see a transit-like feature which has been identified by the BLS search. The duration and shape of this figure would be consistent with a Jupiter-sized planet transiting an evolved star. On the right, a slope from low power to high indicates a potential granulation noise signal. Furthermore, a bump in the Fourier spectrum is visible around 200 microHertz, which could potentially correspond to stellar oscillations that would indicate a 3-4 Rsun radius for this star. However, this power excess is a little too noisy to do proper asteroseismology. Luckily, this was a CVZ target, and thus we could combine 12 sectors of observations, which showed that the planet transit is real, but the oscillation bump is not. Now to search tens of thousands more lightcurves for a candidate with both asteroseismic and transit signals!